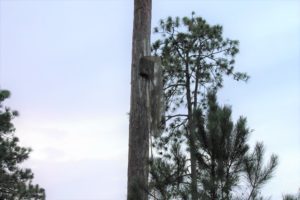 On Monday 26th August, at 7:00 PM, Cyndy and I (Barry) met with Mark Pavlosky Jr, MPJ Wildlife Consulting LLC, who we have worked with in our attempt to reintroduce the endangered Red Cockaded Woodpecker (RCW) to Stable View. While many readers might be up to speed with this project, for those who are not, last spring, Mark inserted artificial cavities into fifteen longleaf pines in three locations, one to the east and two to the south of the equestrian facilities at Stable View. As luck would have it, almost immediately, one RCW male dispersed from a nearby population and found a new home here at Stable View.

So, as the sun was going down, we drove out with Mark to where he had seen an RCW two months ago, at the southernmost cluster of cavity trees that were created on the property. The evening was still, a clear sky, with no wind. While the noise from I20 was difficult to avoid, we quickly realized that all was good when almost immediately Mark pointed out the distinct call of the RCW less than 100 yards form the cavity trees. With spotting scopes and cameras, we hid about 50 yards from the cavity trees focusing on the tree with the most sap running down its bark. RCWs will create resin wells in the bark of their cavity trees to allow sap to flow, this helps them, protect their cavities and their nest from predators. Mark told us that close to sunset the RCW would stop foraging for the day, and return home to one of the cavities that Mark had inserted into a 100+ year old longleaf pine last spring. It took possibly two seconds for our very first Stable View RCW to fly from a nearby pine to his man-made nest twenty feet up in a longleaf. So, now we had confirmed which of the cavities he was using, but we were really setting ourselves up for potential success early the next morning……… 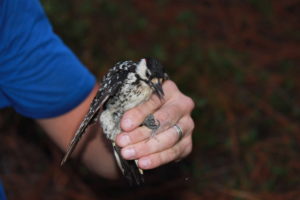 On Tuesday August 27th at 6:00AM, Mark arrived at our house while it was still dark. Now our job was to capture and confirm from where our RCW had relocated. Once captured, this would be easy to determine. Because they are endangered, the majority of RCW populations are intensely monitored throughout the southeast. Part of this monitoring requires banding young nestlings with a unique set of small plastic color bands and a single aluminum band that has a 9 digit number line as a social security number.

It was close to 6:30AM when we arrived by the tree where we observed the RCW roost the night before. Mark positioned a net on a long pole against the entrance of the cavity. This was to bring the bird down to the ground and inspect the bands on his leg. At close to 7:00AM, just as the sun was rising, our RCW flew out of his nest into the net. Having gently brought our RCW to the ground, his bands were confirmed, pictures were quickly snapped, and he was released. Confirming what Mark suspected, the band number matched an RCW that Mark had translocated from the Francis Marion National Forest last November to Hitchcock Woods, in Aiken, SC.

We are trying to find a name for our RCW. The winner will receive Amazon gift cards to the value of $100. All entries by Oktoberfest. The prize will be announced at the Oktoberfest Competitor Party on Saturday, September 28th.

USEF/USDF “Only In America” Dressage

USEF/USDF “Only In America” Dressage

The Pavilion itself is a view, but have you seen o

Photos are up online at SparkyPhotography.Store fo

🎉 Tap the link in bio for the results of Stable

Jump back into action with Stable View’s $350,000+ H/J Challenge Series, continuing on with these dates: 🔽

(Link in bio to register.)

Stable View offers a quiet and comfortable setting for riders to demonstrate their hard work, spend time with peers, and have fun! On-site perks include:

We hope to see you back at Stable View for these H/J Shows!

🏆 Winners of the $2500 USHJA National Derby 🏆 in Summer Classic II of the H/J Challenge Series! …

Congratulations 🎉 Martin and everyone on all your success

Double Tap is An Amazing Horse!!!

🏆 Congratulations to the winners of the $25,000 Grand Prix🏆 in Summer Classic II of the H/J Challenge Series! …

What about Hunter Derby show winner !!!!

Attention all TB owners! Today is Opening Day for the TIP Championships at Stable View, October 6-9.

(Link in bio to register.)

Stable View offers a quiet, and comfortable setting for riders to demonstrate their hard work, spend time with peers, and have fun! On-site perks include:

We hope to see you in October!

We are so excited!!!